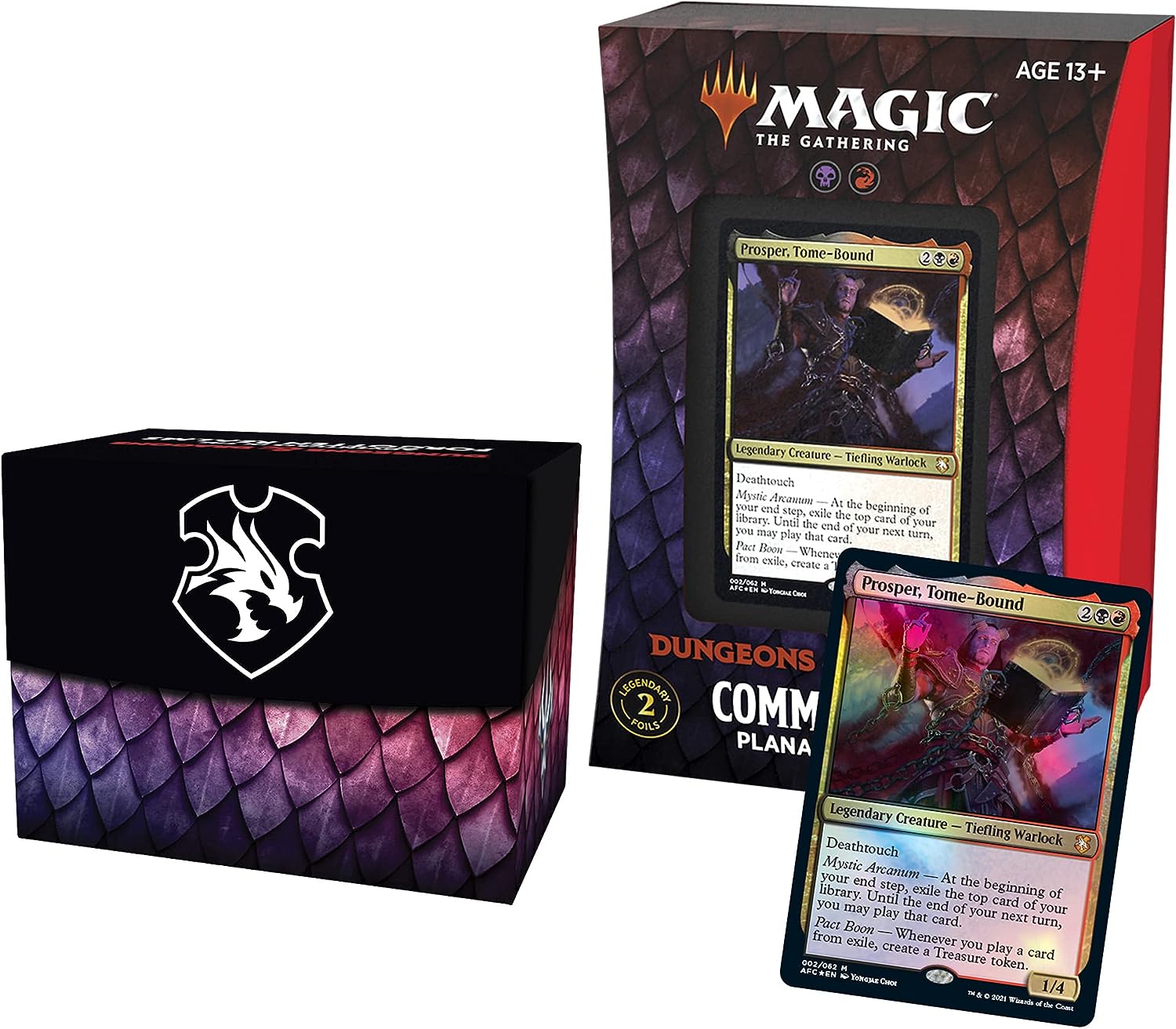 Four adventurers have set out to make a name for themselves on the Sword Coast—the warlock Prosper, the paladin Galea, the barbarian Vrondiss, and the wizard Sefris. Who will you join in their quest for fortune and glory?

Harness the power of rage with Vrondiss, calling upon the spirits of his dragonborn ancestors to incinerate your enemies.

Venture into the Forgotten Realms’ deepest dungeons with Sefris. Emerge with a powerful army of undead and drag your opponents to their doom.

Stand tall next to Galea and arm your forces with powerful Auras and Equipment. With a paladin’s protection on your side, none shall do you harm.

Wield power drawn from Prosper’s fiendish patron, pulling spells out of exile—whether you own them or not.

Magic: The Gathering and Dungeons amp; Dragons have partied up for a crossover made in nerd heaven.

Cast iconic spells like Phantom Steed and Hellish Rebuke. Terrorize your friends with a paranoid beholder. Or kit yourself out with Winged Boots and a Belt of Giant Strength.

Despite being one of the largest and most fearsome red dragons in Faerûn, Klauth is sometimes moved by strange whims to perform acts of kindness for creatures he doesn’t think can harm him.

Get a traditional foil Klauth on your side with Draconic Rage and you’ll also find a nonfoil Wulfgar of Icewind Dale—famous friend of Drizzt Do’Urden and wielder of the magical warhammer, Aegis-fang.

Mind flayer Nihiloor serves as a spymaster for Xanathar, beholder crime lord of Waterdeep. It spends much of its time creating intellect devourers—brain-like creatures that can inhabit the skulls of humanoids and transform them into puppet-spies.

Dungeons of Death includes one traditional foil Nihiloor, plus one nonfoil Minn, a Gnome Wizard and master of illusion who delights in the company of her semi-imaginary friends.

From his icy fortress of Svardborg, Jarl Storvald leads teams of frost giants out in great ships to search for the Ring of Winter, an artifact he can use to bring about the Age of Everlasting Ice.

A traditional foil Storvald, Frost Giant Jarl can be found in the Aura of Courage deck alongside a nonfoil Catti-Brie of Mithral Hall—brilliant archer and member of the famous adventuring group, the Companions of the Hall.

The beholder Karazikar is, like most of its kind, hateful and suspicious. Its servants are keenly aware that failure to please their master means death or petrification.

Unleash a traditional foil Karazikar on your opponents with Planar Portal and add to your collection an infernal character who will surely understand you desire—Lorcan, Warlock Collector. Lorcan himself achieved a rare feat: a full collection of thirteen warlocks, each descended from one of the first warlocks to make a pact with Asmodeus, ruler of the Nine Hells.

Commander is a multiplayer way to play Magic — an epic, free-for-all battle full of strategic plays and social intrigue. Alliances may be made, but in the end, only one player will be left standing. Until the next game begins, of course!

Assemble a party, choose your commander, and try out Magic: The Gathering’s most popular format with a ready-to-play deck.

Welcome to Global RuneScape! Global RuneScape is a RuneScape fansite with hundreds of detailed guides, maps and quest walkthroughs! We offer databases containing information about thousands of items and monsters, in addition various tools designed to enhance your RuneScape experience. We also have a friendly and helpful community where you can discuss and ask questions related to RuneScape!

Herald article: Magic the Gathering CCG: Signature Spellbook - Jace
Global RuneScape veteran and ex-RuneScape player Chokelius takes a look back at what GRS means to him and discusses whether fansites are still necessary in a modern age of Wikis and Jagex provided player guides. Read more...

Chokelius helped greatly with the site in its early days, submitting vast amounts of detailed and high quality content so be sure to give him a big warm welcome back and let him know what you thought of this week's herald in the comments below!

We're always looking for new Herald contributors so if you've got a great idea that you think would make an interesting article then don't hesitate to get in touch!
– Mike

The Global RuneScape team is proud to present its guide for the latest quest in RuneScape, Some Like it Cold. Head back into the icy north and help rescue a polar bear spy from the clutches of a POW (that's Prisoner of Walrus!) camp. Many thanks to Flinched for this great guide!

Teddy - an agent of the PBJ - has gone missing while on the trail to find Larry. Chuck has received a ransom note from the Walrus and has asked you to investigate. Become a roadie for the famous Ping and Pong and break into a PoW camp to save Larry.
– Mike

However, onto the good news - we're back! We've reassembled an elite team of 'Scapers and veteran GRS'ers to help restore Global RuneScape and return it to its rightful place as one of the best RuneScape fansites on the internet!

As a gold-level Jagex recognised fansite, you can expect only the best and most concise guides and tips for all of the latest and hardest content in the game along with a bustling active community to share all your stories, strategies and PKing victories with.

Of course, we're going to need a lot of help and that's where you come in! If you'd like to help submit any guides, items or monsters then you can do so by heading over to the Submissions / Updates forum. As things are always changing in the world of RuneScape, we're also always in need of updates to the existing content on the website so if you spot anything that's not quite right any more in a guide then please do let us know in the forums! All contributions will be rewarded with contributor points, allowing you to rank up and show your GRS pride among the forums!

We have lots of exciting website updates in the pipeline which we're sure will make your day-to-day RuneScaping that little bit easier and more fun so we'll be sure to keep you updated on those as and when we can!

Welcome back all and we look forward to seeing you online!
– Mike

Hello all! In the spirit of our current skill week, I've taken the liberty of writing a short article on why Dungeoneering can be an enjoyable skill. You can find it in the Global RuneScape Herald!

Feel free to discuss it here after reading. Is it enjoyable to you?

"Dungeoneering is controversial, challenging, and enjoyable. This latest Herald entry gives insight into why it is enjoyable to a large portion of the RuneScape community. Enjoy the read!"
– Slim50

The Tormented Demon Slaying Guide is up and running. Many thanks to I R 456 on the making of this great guide!

Since the Woodcutting Training Guide has been released, me and Kevin have been at hard work with a new guide. I present you with the newly finished, hot of the press Mining Training Guide (F2P)! This guide was written by myself (1992-93 SkyBox Series 1 Basketball #230 Eddie Johnson Seattle Su), and Kevin. Special Thanks to Rank Penguin for the beautiful animated picture you see below, and Anna Molly for the use of certain parts of his never finished Mining Training Guide. So everyone have a look and the new guide, and have a blast mining! If you find any errors or bugs, please send me a Private Message (PM) and I will try to fix it ASAP


Mining, it's what makes the RuneScape economy go round. Without it you wouldn't have your Runite Platelegs or the limestone bricks for your house. This is one of the best ways to make money in the game. A single Runite Ore is worth up to 13k! In this guide we will cover how to get you the leet cape and where the best training spots are. We will be covering free to play methods only!

Hello all! As many of you may already know, I was invited by Jagex to the real-life RuneScape event organized by Jagex, RuneFest 2010, in London. During my stay, I also got to visit the Jagex offices. Head over to the Herald to read about my trip to Jagex and RuneFest.

After you've read the article, feel free to ask me any questions in BAT-SCN03 2016 2YR ANTIVIRUS Business. I may also post more images in the thread, as I have lots of images that I chose not to add to the article in order to not make it too long.

Once again, our very own Content Team Members have got together and written a guide. So everyone please congratulate Kevin, Rebel007, and myself (Nourison Passion Pink and White Vintage Area Rug 2'2" x 10', 2'2) on the making of this wonderful guide. So everyone pop on over and have a look at the brand new Firemaking Training Guide!


The Firemaking cape is one of the more common skillcapes you will see around Runescape. It is an easy skill, involving only logs, a tinderbox, and a decent amount of time and patience. There are a few different ways we want to show you how to save money, or shorten the time it takes to get 99 Firemaking. We'd also like to go over the different locations that are best for training. This will include both F2P and P2P locations.

Hello all! We've just released a quest guide for the latest quest in RuneScape, Gunnar's Ground. Note that this is a rather short and easy quest, and for most players, it should be easy enough to complete without a guide.

A smitten dwarf sits lone, forlorn;
His love full-formed but lost.
Will you help to guide his path and
Uncross a love star-crossed?

The Waterfiend Slaying Guide is now up and ready thank to Night_elf45 who has done a wonderful job. So stop on over and view this wonderful guide.